Last October, GH Cranes’ homemade ‘Astebatean-1week delivery’ project hit the ten-year milestone. As its name in Basque indicates, guarantees delivery to the customer within a week. To celebrate this anniversary, we spoke with one of its main promoters, Martín Berakoetxea, Industrial Director of the Components Unit at GH Cranes & Components.

Tell us how the Astebatean service was born
Its birth is closely linked to the global crisis of 2009. On the one hand, sales of standard cranes had fallen in the domestic market, on the other, there was a need from our subsidiaries abroad to improve delivery times in terms of what mechanisms are concerned. This led us to carry out an exhaustive analysis and to realize that, with a good organisation, we could reduce the deadlines considerably, and more considering that we had the commitment from the Management to maintain the workforce so, therefore, we had available resources. Another relevant factor in the birth of Astebatean is that at that time the first steps were born from what today we call “Business Units”, the Lantegis. They organized GH into teams of people oriented to their markets and customers. At GH we understood that the crisis represented an opportunity at the same time, and, thanks to this advanced service, we were able to adapt to what the market demanded of us at such a delicate moment.

«Thanks to this advanced service, we were able to adapt to what the market demanded of us at such a delicate moment»

The idea was to reduce lead times from five to six weeks to just one. It is not surprising that, at first, many had doubts …
Indeed. The first meeting on the 22nd July 2009 was not easy, even tense I would say. As is often the case with all changes, a part of the team viewed the initiative with suspicion and doubted its chances of success. However, when they heard the arguments we had, the vast majority were convinced. Therefore, as soon as we returned from vacation, we all got down to work.

Tell us about the team that carried out the commissioning of the service.
It was made up of twenty-seven people who we divided into three teams to analyze the process from offer to delivery: the first was in charge of the start, offer, order, etc. … the second of the manufacturing and supplier processes, and the third of managing the expeditions. From those days I remember the intensity and enthusiasm with which we all worked. A hoist requires a very high degree of customization so hundreds of details had to be polished and many meetings with teams and suppliers had to be held. The goal was not easy, but the enthusiasm with which we worked on the project made everyone want to contribute ideas and solutions. The success of the Astebatean service is the result of the excellent joint work of the three teams and the people who worked in them.

How was the service received by customers? Was the promise ‘One week’ been fulfilled from the beginning?
The service was very well received. If the first Beasain hoist came out on October 27, by December we had already made almost thirty deliveries under the Astebatean service. The clients also immediately congratulated us. We knew that in order to have credibility we had to fulfill the one-week delivery promise and we have done so from the beginning until today. In these ten years we have delivered more than 3,500 kits and hoists and in 90% of them we have met the deadline of one week and, the one that has not done so, has an average delay of one day.

How has this service helped GH over the years?
In the difficult time in which it was born, it contributed to the development of the subsidiaries and to GH expanding its commercial network by being in the market with innovative products. Today it represents a differentiating value compared to the competition.

Coincidentally, the Astebatean service celebrates its 10th anniversary in another especially difficult year. How has the pandemic affected you?
The service was only affected the first two weeks of the crisis. At that time, we did not have all the necessary guarantees to meet the deadlines and, before failing, we decided to stop. Nowadays, however, the service works with total normality and efficiency.

What improvements do you plan to make in the future? Reduce deadlines perhaps?
From the beginning we set up a monitoring team of ten people who, in addition to guaranteeing compliance with deadlines, works for the continuous improvement of the service and for gradually expanding the range of products available in it.
At the moment we have not considered reducing the deadlines because we believe that it would not add value. It would only increase the risk of missing deadlines and we believe that this service should be deeply associated with the idea of ​​compliance. It is a guarantee and the main value. 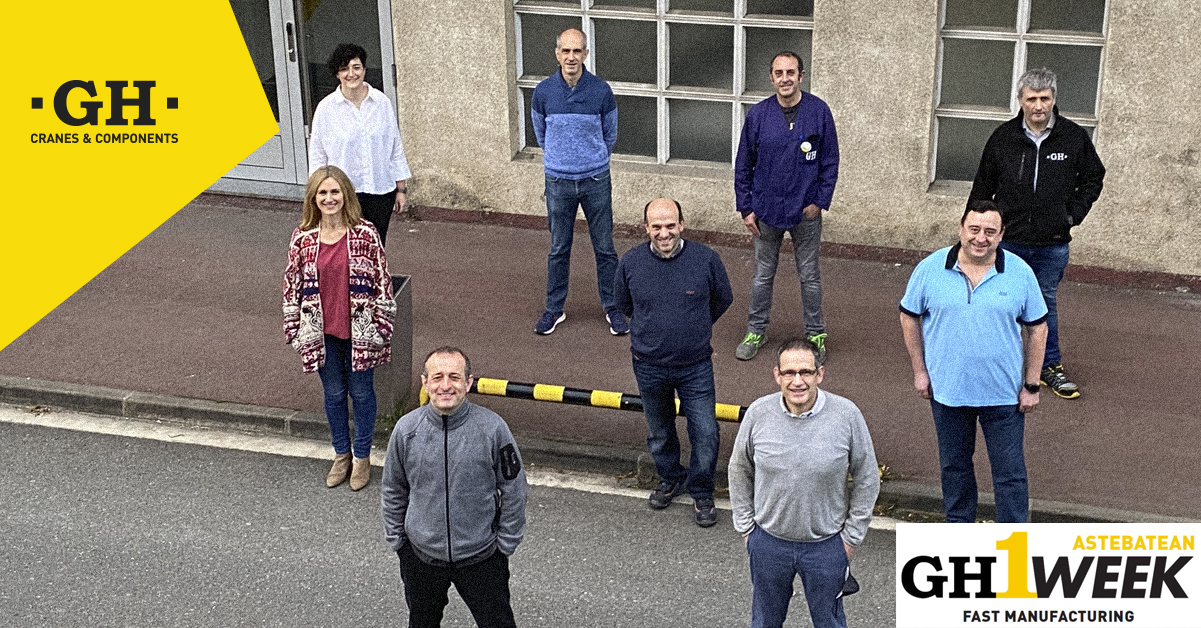 Although Martín Berakoetxea has been chosen as the protagonist of this interview, both hi and the management of GH Cranes & Components want to thank the team for their great work and effort to make ‘Astebatean’ possible:

Eskerrik asko! Thanks a lot!